Last weekend I participated in a Portland-style bike move.  A friend from work was moving house and one of her friends suggested moving by bicycle.  She borrowed a few trailers and spread the word.  When I heard about it I decided the Yuba and I had to be a part of it.  There were two trailers, 3 normal bikes with baskets or panniers and one folding bike, and the Yuba Mundo.  We managed to move everything in two trips (the second trip only needed 5 of us). 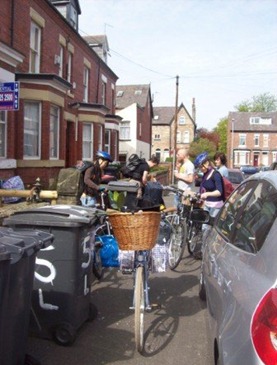 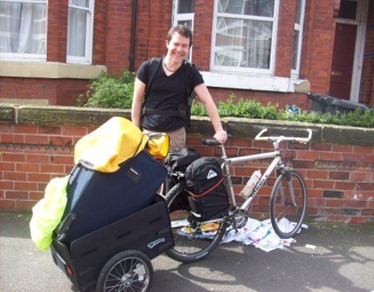 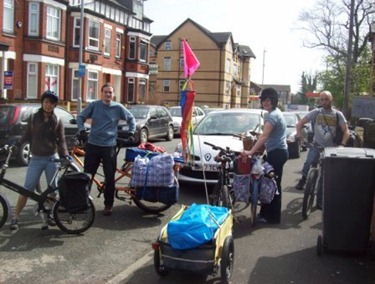 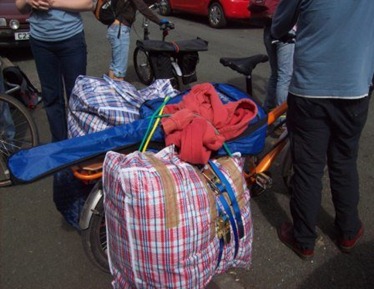 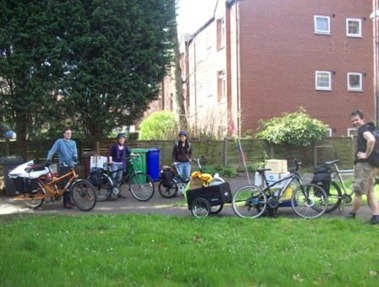 All in all it was a surprisingly easy affair to move a person’s  possessions around 6 km by bike.  I hope this idea takes off in Manchester, not only was it green, it was also a great chance to meet like minded people and have a fun time.

I know its not real ale, but I thought I would post this to show the potential of the Yuba in allowing you to capitalise on supermarket special offers:

Additionally I wanted to show off my latest pointless contraption for the Kona Africa Bike:

The Social Ideology of the Motorcar

I have got the hub brake on the custom wheel working now.  I had to wait a couple of days for the special Sturmey Archer brake cable.  Now I have one, I think I should be able to replace it with a standard brake cable without too much heartache when the time comes.  The brake is about as good as the Tektro V-brake which came with the bike, but it will still be just as good in the pouring rain.  Hub brakes behave a little differently from the rim and disc brakes I have used, the best way I can describe it is that instead of a constant braking force being applied at the wheel when you apply a given force at the lever, the braking force seems to grow over a period of a few seconds when a constant force is applied at the lever.  The result is a nice quick stop but to the uninitiated the brakes feel odd.  I do quite like the fact that I won’t have to do any maintenance on the brake for a very long time. 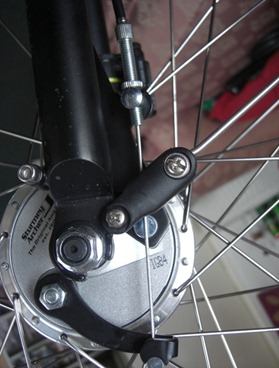 The other feature of the hub I have been playing with is the integral dynamo.  I am quite happy with my existing battery LED lights and I am not currently planning to replace them with dynamo lights.  The hub outputs 6 V of AC which is great for filament lamps but sucks for LEDs and lots of other devices.  I purchased a bridge rectifier from Maplin for 27p to convert the 6V AC into 8 and a bit V DC.  I connected the output from this to both a fixed positive voltage regulator (£1.02) to produce 5V DC, and a battery pack (89p) containing 4 rechargeable Ni-Cad AA batteries.  This allows the Ni-Cad batteries to charge when no other load is attached, and they work in series with the dynohub to power a device when connected. 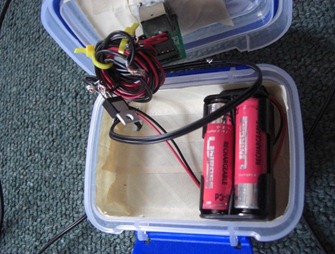 The whole lot is inside a clip-sealing tupperware box, and the 5V DC and ground wires are connected to a pair of USB ports: 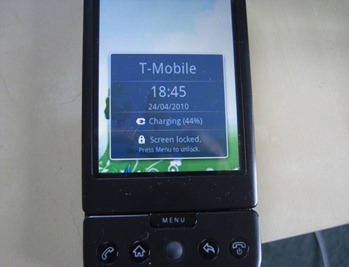 I had been thinking about doing a disk brake conversion on the Kona Africa Bike since before I bought it.  The V-brakes on the Kona are great, but I prefer a bit more reliability and wet-weather consistency in my brakes.  The problem would have been that I would have needed a new front wheel, fork aheadset and stem (I already have a spare brake set).  I decided to look at other options, and after being impressed by the coaster brake I decided to get a hub brake wheel.  After looking online I found that no-one sold pre-built wheels and so decided to do it myself.  I used to DT Swiss spoke calculator to determine the spokes needed to marry the Mavic rim and the Sturmey Archer X-FDD  hub containing both a drum brake and a dynamo.

I ordered the rim and a set of spokes and nipples from Chain Reaction Cycles.  Sadly the set of 36 spokes and nipples turned out to be a set of 37 spokes and 29 nipples.  Thankfully the guys at Edinburgh Bicycle Co-operative gave me the remaining nipples for free.  With nothing more than Sheldon Brown’s wheel building guide I set out to build the wheel.  First I put the inside spokes in on the drive side 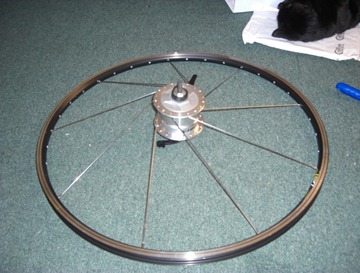 Next, the inside spokes on the opposite side 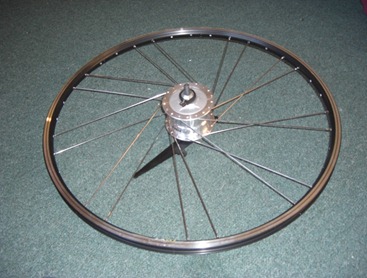 Followed by lacing in the outside spokes 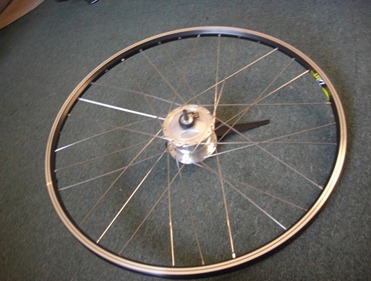 Rather than buying a truing stand, I mounted the wheel in the fork and used the V-brake pads to true the wheel. 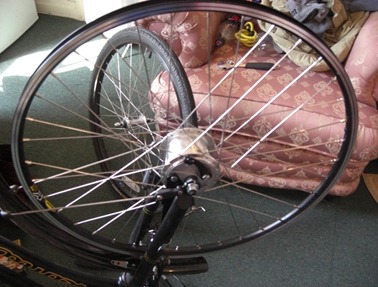 The wheel stood up to the test ride well, although the spokes needed a bit more tightening afterwards.  Sadly, the hub didn’t come with the fixings to use a standard brake cable to operate the brake, so I have ordered one and it should arrive in a few days.  The bracket to mount the reaction arm is designed for a much smaller fork circumference than is common on most bikes, so I had to make a work around: 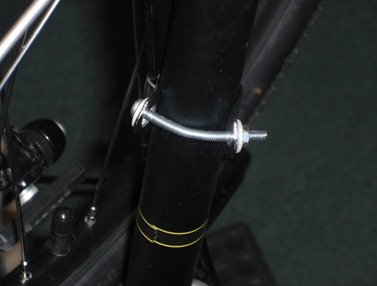 The build was easier than I expected and I would urge anyone to have a go at building a wheel (without dish), it was a good experience and it wouldn’t have cost a lot to have it put right in the event of failure.  First impressions on the drum brake will follow soon.

I have recently sold my loyal old Revolution Cuillin Sport ‘08 mountain bike to a friend.  The reason behind this was that since I got the Yuba Mundo I have been enjoying its relaxed upright riding position and swept back bars, the mountain bike was starting to feel less comfortable (but also faster).  I decided I wanted the comfort of the Yuba Mundo but the size of a regular bike so I could pop out easily on it, and take it on a train.  Enter the Kona Africa Bike One.

As you may tell from the link above, the Africa Bike One has been discontinued in favour of its bigger brother, the Africa Bike Three.  Three gears is what I wanted however at £350 compared to £200 for the One, I have decided I will do the three-speed conversion myself at a later date.  One of the best things about the Africa Bike is Kona’s 2-for-1 deal whereby for every 2 Africa Bikes sold here in the UK (and probably the rest of the EU and North America, Australia etc) they will donate one to aid workers in Africa and recently Afghanistan.  Aside from its philanthropic value, this also makes the bike practical and sturdy (being designed for use in places where maintenance and repair could be quite difficult).  The bike is cromoly steel with a front V-brake and a rear coaster brake, single-speed and comes complete with mudguards, a chain guard, a rear rack integrated into the frame, a rear-wheel “Nurse’s lock,” and a folding front basket.  For the price it is a hell of a lot of bike, just imagine the price of all of those accessories separately. 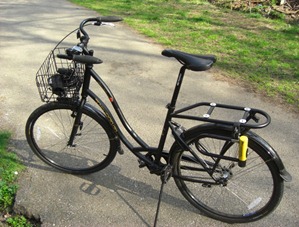 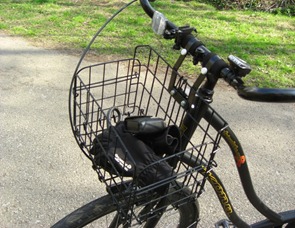 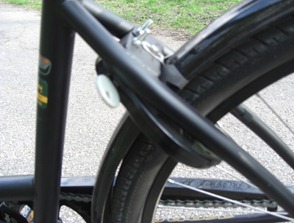 The only downsides are the short stock non micro-adjust seat-post and the threaded fork and non cartridge bottom bracket. 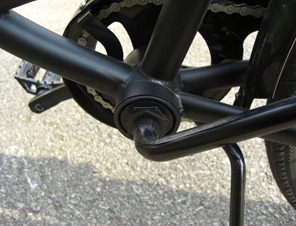 The bike rides extremely well; the swept back almost- moustache handlebars deliver an extremely comfortable riding position.  The step through frame makes it easy to hop off and into a shop for a moment (as does the Nurse’s lock) and the basket is particularly useful for everything.  I have never had a basket on my bike before and now I am thinking about one for the Mundo.  I can finally see why Urban Simplicity’s Joe George loves front racks so much.  The single gear is well suited to urban riding, hills and setting off are not too bad and you can cruise at 25 km.h-1 at a comfortable cadence.  I’m still going to replace it with a Shimano Nexus 3-speed gear hub though, mainly to increase the versatility of the bike.  The stock Continental Town Ride tyres are good on roads and paths, but I might swap them for Fat Franks in the future to make the bike more towpath-worthy (plus they look good too).  The stock seat was also surprisingly ok and the Kona bell is lever-operated to produce a satisfying long ring when pushed.  I found the choice of a rear coaster brake quite unusual but I imagine it is due to the reliability and low-maintenance requirements of hub brakes in general.  I am generally a proponent of front-brake only braking most of the time (thanks to the late, great Sheldon Brown) but the coaster brake is surprisingly effective and quite useful to slow you down gently. 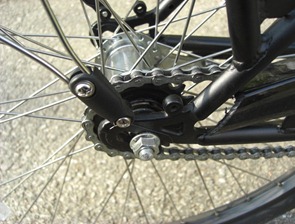 The bike has a pleasing “uncool” quality; I can’t see many Manchester scallies being interested in stealing it.  Riding the Africa Bike has been thoroughly enjoyable and has given me a better understanding of the appeal of single-speed bikes.  I am happy to add it to the stable.  Stay tuned for my Shimano Nexus 3 upgrading guide soon.