Well, I’ve finally converted the Kona Africa Bike One into a Three.  Initially I  planned to buy the hub, sprocket, fitting kit, shifter, spokes, rim and rim tape separately and build the wheel from scratch.  However, when I added up the total cost of these components it was coming close to £100.  Before shelling out the cash, I decided I would have a look to see how much the cheapest Nexus/Sturmey /SRAM 3-speed-equipped bike I could find was.  It turned out it was the Raleigh Drift at £187.  Considering that I would have a single speed wheel with coaster brake left over at the end of the process, I decided to buy the whole bike, steal the back wheel, shifter and fittings and replace it with the back wheel from the Kona, with the intention of selling the newly singlespeed Drift on for around the £100 mark.  I get my 3-speed and someone gets a cheap beach cruiser bike. 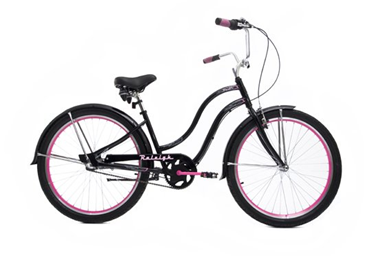 This turned out to be a quite a good idea in the end, after overcoming a few hurdles.  The O.L.D of the Nexus hub was about 10 mm wider than that of my coaster brake hub.  After consulting with Uncle Sheldon I decided to cold set the Kona frame.  With nothing more than an old table leg and some brute force I managed to increase the space between the rear dropouts and the wheel went in without issue.  The 16t sprocket from the Nexus wheel was a bit small for my taste, and it made the third gear essentially redundant.  The gearing of the nexus three-speed hub feels like roughly minus a third in 1st and plus a third in 3rd, so I decided I would swap it for an 18t sprocket like the one which came with the Kona, so that 2nd gear would be the same as my single gear had been previously.  This produced gearing roughly equivalent to a 24-18-12 cassette.  There appeared to be a great deal of confusion online as to whether sprockets from Sturmey, SRAM and Shimano hub gears were all cross-compatible.  Some of the hub gear sprockets I saw appeared to be splined in a similar manner to those used on a cassette: 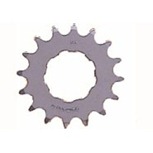 Others appeared to be splined in a different way, with just 3 small protrusions on the inside edge: 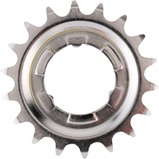 After noticing in the forums that the consensus was that the sprockets were interchangeable between most hub gear manufacturers, and also that the second type of sprocket was available from Shimano and Sturmey, I decided to take the plunge and buy one.

I was slightly concerned reading about how fiddly and generally an pain in the arse it had been for many other people to remove and reinstall the snap ring holding the sprocket onto the hub, but my own experience was fairly positive.  I prefer doing this to removing and installing handlebar grips.  All you need is two small flat head screwdrivers to persuade the ring off and on again and that is it.  Much easier than messing with a chain whip and lockring tool.

The only downside is that my rear wheel rim is now pink.  Its not completely negative though, my uncool bike is now that extra bit more uncool, and I assume also less desirable to thieves. 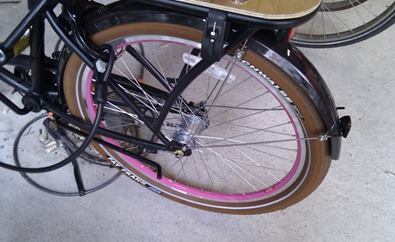 and finally the bell crank: 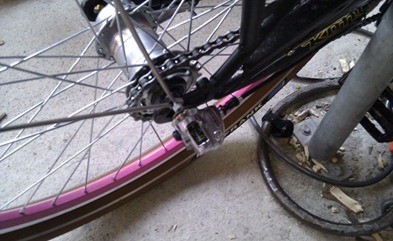 I am pleased with the result of this conversion, it has greatly improved the effective range of the bike.

I came across this on eBay, I have noticed it before but I am only just getting around to posting it now. 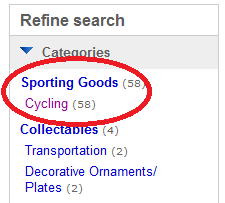 This is one of the biggest barrier to mass adoption of cycling in the UK.  Every company selling bikes sells them as “Sporting Goods.”  I doubt that the car would be in its sadly dominant position today if the places which sold them promoted them as sporting goods, showing off only the F1 cars in the showrooms, keeping the more practical transportation-oriented models out of sight.  Yet this is what practically every bike shop I have ever visited does.  If you want to get around on a practical everyday bike they can oblige, but the range of them is always small and they are hidden at the back of the shop (or they have to order them in from their supplier).  It is ultimately self-defeating for these companies to promote cycling as sport.  Far more people want an effective and easy way to get from A to B than want to participate in races, cyclocross and freeriding etc.

By all means keep the mountain bikes and track bikes and all of the performance clothing and components available, there is absolutely nothing wrong with it.  But please don’t promote those thigs as cycling.  Promote cycling as what it is (or at least could become) to the rest of the population; cheap and effective transportation.