A reader has suggested that I cover the news of Manchester Metrolink’s recent vote to continue its hostile policy towards cyclists.  I am not a fan of the Metrolink, mainly because its expansion has come at the expense of proper railways.  The only parts which were purpose built are the city centre sections.  These are the only parts of the Metrolink network which provide an advantage over trains, allowing transport within the city centre.  When you look at journeys made with this part of the network, it is easy to realise just how small the centre of Manchester is and how unnecessary this bespoke part of the Metrolink network is.  For example, if you live in Bury and were to get the train into Manchester to go to the Arndale before the Metrolink, you would have to walk from Victoria Station to Market Street (Back then you could have brought your bike with you for the trip too).  Nowadays that isn’t a problem, the tram removes this arduous slog from the aforementioned trip.  A quick look at a map however, and it is easy to realise that you could have easily walked the 700 metres from the station to the Market Street tram stop in the same amount of time.

The point I am trying to make is that the Metrolink is only useful for getting about in a city centre environment and shouldn’t be used as an expensive replacement for real railways.  In a city centre as compact as Manchester’s, it is completely useless anyway.  At least if they hadn’t closed the railways people could move their bikes around the longer distances which the Metrolink expansions aim to cover.  The most baffling thing I have come across is the planned Manchester Airport expansion, if bicycles cannot be squeezed onto a tram then what about a family of four going on holiday for two weeks, complete with luggage?

I don’t want to take a bicycle on the Metrolink.  I just want my trains back.

I have had the Yuba Mundo for over a month now and I have found it to be both useful and fun to ride.  I have never been much of a fan of V-brakes, mainly because you need to keep your wheel rim true in order to be able to keep the pads close enough to the rim to provide enough stopping power.  The lack of disc mounts on the Yuba frame did put me off slightly, but the Surly Big Dummy was far too expensive and the Kona Ute was not as capable when it comes to load carrying (It is still a useful bike, Bicycle Doctor on Dickenson Road in Rusholme has a one-off 2008 Kona Ute for an excellent £400 pounds right now, in addition to the ugliest website I have ever seen).  Both of these lacked the Yuba’s side rails.

Eventually I decided that the Yuba would be fine as I could replace the fork and get disc brake mounts that way, after all the only appreciable braking force is provided by the front brake anyway (I tend to think of back brakes as a way of carrying spare parts with you).  I managed to grab a rigid disc-compatible fork from eBay for not too much.  It is similar to the Kona P2 fork or the Surly Big Dummy’s fork.  Replacing the antiquated threaded fork and headset with a modern threadless fork and sealed aheadset was surprisingly simple and I would advise anyone to give it a go.  If you need to cut the steerer tube I would advise getting help with that if it is your first fork installation.  If you check online for help on installing a fork you will likely be told you need various specialist tools such as a star-nut installer, race remover or installer and a bearing cup press.  Reassuringly, as with most precision jobs it is reasonably easy to replace all of these tools with a hammer and a flat-head screwdriver.

Once the fork and wheel was on I installed the disc brake caliper.  I decided to opt for an Avid Juicy 5 with a 185 mm rotor for that extra stopping power when carrying a load. 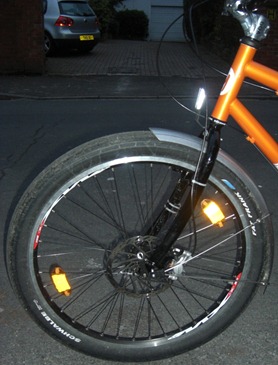 This was my first dabble with hydraulic disc brakes and so far I am quite impressed with their power and the pleasant feel of the lever.  My only complaint is that the brake only comes with a post mount adapter, I had to fudge a shimano 180 mm rotor adaptor to fit it to my IS fork.  The post mount adaptor simply required two threaded holes in order to be a dual purpose post mount and IS mount adapter but Avid seems more interested in trying to gouge some extra cash from its customers.  Nevermind, at least the adapter I bought was made by another company. 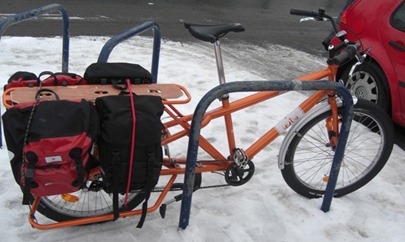 Here is the Yuba before the fork switch. 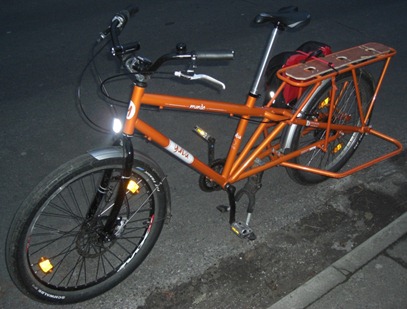 Here it is following the switch.  I think the black looks good, shame I couldn’t get an orange fork, but at least it still looks quite nice.