Five years on a bike (Part One)

This summer marked the fifth year I have cycled as an adult. Of course for the vast majority of my life I have owned and ridden a bike, from my first bike at around the age of three, to my last childhood bike which I gave up on at around sixteen. After my last childhood bike and I parted ways, four years passed where I did not cycle at all, depending on walking and public transport for getting around. It was only because of the disproportionally high cost of public transport that I decided to buy another bike, in order to avoid paying £35 each month to get to the part-time job I had whilst I was an undergraduate. 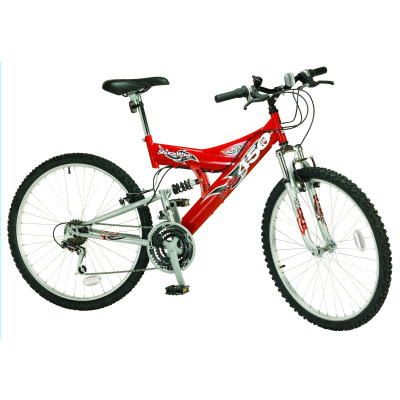 A Shockwave SUS450, the first bike I bought as an adult
That first bike I owned as an adult was truly a real piece of crap, a £90 bicycle-shaped-object from Halfords. I bought it from White City Retail Park and rode it home, a distance of a few miles which seems a completely trivial distance now but which at that time left me completely exhausted. Simultaneously I was also enthused with the feeling of cycling, which I realised I had missed during the previous four years. At the time this bike worked quite well for me, I had no specialist knowledge of bikes or cycling whatsoever and so ignorance was bliss. Within three months of not paying for the bus the bike had paid for itself.
Those early rides to work along the main road from the city centre to Failsworth were a terrifying experience, like most inexperienced cyclists I rode in the gutter, terrified of being hit from behind by a motorist. Thankfully, the rides home were enough to make up for it. Finishing my shift after 10 pm meant the ride home along the same road was much more pleasant and after five hours of manual labour the experience was always refreshing, even in the rain (which on a bike without mudguards, I simultaneously experienced from above and below). I started to use the bike for shopping too, riding to the nearest supermarket with a backpack (the bike had no provision to fit a rack) and riding home with the weight on my back. As an arrangement it was far from ideal, but it was preferable to walking or paying for the bus again.

After three months of using this bike to get around, I had my first altercation with a motorist in Rochdale. The driver had decided to overtake me going down hill on Drake Street in order to make a sudden left turn. It is the sort of stupid manoeuvre on the part of the motorist which, with enough experience, most cyclists learn to expect and compensate for. I hit the left wing of the car and went flying over the bonnet and landed on the road, head first. I suffered some pretty nasty road rash down the side of my face and around my eye, in addition to grazes on my elbow and leg. My bike was relatively unscathed. After leaving the hospital later that day, I knew that I had to get back onto the bike right then, or I might be put off forever. I rode back to the trains station and then on home that night, and luckily the experience didn't put me off cycling for good.
Despite being a terrible bike, I rode it for nearly two years. Throughout those two years, as problems with the bike arose, I started to learn about the basics of bike maintenance courtesy of the excellent writing of the late Sheldon Brown. Sheldon's infectious enthusiasm for all things cycling shone through everything he wrote, even articles about brake adjustment or tracking down mystery creaks, clicks & clunks. After nearly two years of riding the SUS450, the bottom bracket spindle snapped as I was trying to pull away from a set of traffic lights. Whilst initially annoyed, not possessing the tools or knowledge to fix this problem gave me the perfect opportunity to rationalise buying a new, better bike, something which had been on my mind for a few years.
By this stage I was a little bit more knowledgeable about bikes, I had realised that the alleged 'rear-suspension' on my previous bike was little more than a mechanism to leech my pedalling effort and drive me slowly insane with persistent creaking. I also realised that riding with a backpack sucked. However, I was still largely unaware of several important practical features which existed on other bikes, such as the merits of having fewer gears, hub gears, proper mudguards, chain-guards, the irrelevance of front suspension for the type of riding I mainly did and of course, upright geometry. The next bike I purchased was a Revolution Cuillin Sport from Edinburgh Bicycle Co-Operative. At the time I knew little about the specific merits of different types of bicycle brake, I only knew that after riding with some incredibly weak, low-end V-brakes for a few years I wanted something better, and I promptly set my heart on having a bike with disc-brakes.
Despite still being quite an impractical choice of bike for my needs, the Cuillin Sport was definitely a step in the right direction. Being slightly better suited to my needs, I naturally started to make more of my journeys by cycle, and as this bike represented a more significant investment to me at the time, I started to learn more and more about bicycle componentry and maintenance. Over the next 18 months I acquired the tools and expertise I required to keep the bike in tip-top condition, whilst occasionally upgrading the odd component to make the bike more suitable for my needs. After around 12 months, I had converted the bike from a mountain bike to a hybrid, and my level of knowledge had increased to the point where I knew that the bike was not really the right choice for my needs. I also learned about the Yuba Mundo through reading blogs such as Urban Simplicity, and became interested in just how capable a bicycle could be.

By this stage, I was aware of vehicular cycling, Cyclecraft and the range of measures which cyclists can use to minimise the problems which arise when riding on a road network which is designed solely around the needs and wants of the private motorist, where the needs of cycling and cyclists are usually not considered at all. I was mostly confident on the road but could still remember what it was like to cycle as a novice. I was still not quite fast enough to survive on some of the most hostile parts of the road network and blissfully unaware of how things like Cyclecraft, speed and cadence become irrelevant with the right infrastructure.
Eventually, a minor windfall from overtime meant that I could afford to buy a Yuba Mundo of my own. The Yuba Mundo represented something of a turning point for me. Whilst it did not completely representing the frame geometry I would come to evangelise, it gave me a new experience; riding a bike and feeling truly comfortable whilst doing so. Despite its size, the Yuba Mundo became my primary bike. When I did occasionally choose to instead venture out on the mountain bike, I was acutely aware of how uncomfortable it was; riding hunched forward, a fair amount of weight carried by my hands and with a triple chainset making use of the full range of the gears unnecessarily difficult. The Yuba was much more pleasant to ride.

I had not intended for the Yuba Mundo to take over as my primary means of transport, and its sheer size meant that using it as such was a bit of a compromise. I decided that what I needed was a smaller equivalent to the Yuba for everyday use, and I found that with the Kona Africa Bike. The Africa Bike was the first bike I owned without dérailleur gears, which was a revelation. Initially a single-speed, I acquired a Shimano Nexus three-speed rear wheel and decided to upgrade the Africa Bike to a three-speed. Shifting when stationary, the lack of maintenance and the ease with which they pair up with a chain-guard (or case) made me wonder why most bikes used for transport didn't come with hub gears. The only downside to the bike was the front V-brake; I hadn't yet fully forgiven the crappy V-brakes on the SUS450. I decided to remedy this by investing in a new front hub. I was very interested in the idea of the bicycle providing its own power source for the lights, and had been reading up on dynamo hubs. When I saw the Sturmey Archer X-FDD drum-brake and dynamo hub, I knew I had to try it. The hub wasn't available in a production wheel, so I read and re-read the Sheldon Brown Wheelbuilding article and decided I'd have a bash at building myself a wheel. To my surprise, the wheel turned out just fine first time. The Africa Bike, with some modifications had been turned into an ideal shorter-range utility bicycle.

Reading Sheldon Brown's site had infected me with a curiosity about the Raleigh Twenty. After reading about it on his site, I realised that these things were everywhere. After looking on eBay I realised that I could have one of my own for around £20-30 and I promptly took that offer. The Twenty gave me the opportunity to completely strip and re-build a bike for the first time. I had done almost all of these jobs before, but never all at once and on the same bike. After a weekend or two of work, I had re-painted and completely refurbished the Twenty and found it to be a delightful little bike, with the added bonus of it being worth practically nothing allowing me to leave it locked up outside without worrying about it. The Twenty was primarily used as a loaner bike, so I could still use the bike to get around when I had guests. When I later came to acquire a Brompton, the Twenty no-longer had much to do, so I sent it off to retirement at my father's house.

Whilst I was quite happy with the Kona Africa Bike, I was becoming aware that it's hybrid geometry was somewhat limiting on longer rides, where after around 20 miles or so in a single day it would leave my legs really very tired. I was aware that the right geometry, roadster geometry, would allow me to use my leg muscles more efficiently on longer rides. At the time I wasn't planning on changing bike again, until I saw the Raleigh Tourist De Luxe (DL-1) on eBay at a price too good to pass on. Whilst not a huge departure from the Kona, the slightly different geometry was much more comfortable on longer rides, whilst also making it easier to put power down when setting off from stationary. The DL-1 also represented my first experience with Brooks saddles; whilst not exactly comfortable at first, I would later come to put a Brooks on every bike I rode.
Posted by Dr C. at 16:36 8 comments: