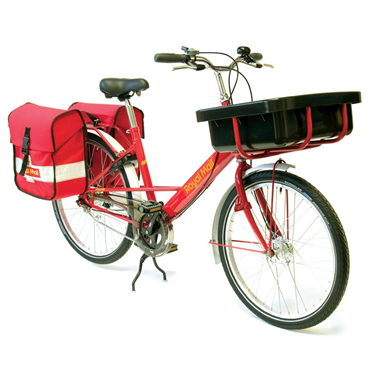 The Pashley Mailstar is an instantly recognisable British institution.  It is no Yuba Mundo or Madsen Bucket Bike but it has a respectable capacity for mail.  Few know it by name but everyone will recognise the bike in the picture above, used for decades by the Royal Mail for local deliveries.  It offers several obvious advantages over thing such as trolleys (only move at walking speed), walking alone (slower, lower load capacity) and motorised transport (a whole array of environmental, cost and social problems).  It even offers a further advantage; healthier workers take fewer sick days.  But now the Mailstar is under threat from the management.  Their motivations are unclear; the blanket “health and safety concerns” excuse has been trotted out but anyone who rides knows it must be covering up some other internal political reason.  Perhaps Royal Mail has been offered a deal for cheap vans from an automotive manufacturer and ditching the iconic bikes is part of the deal, perhaps the pension pot is being stretched too thin for the management’s taste by the extended life-spans of the former cycle-posties.

Most companies would (or should) be considering moving towards a sustainable, bicycle-based alternative to their transport needs where possible.  It strikes me as odd that Royal Mail would move away from this established infrastructure they already have at a time when transport sustainability is increasingly important to us all.  If there is a save the Mailstar campaign, count me in, I think the public would not like to see these icons disappear and by raising awareness (for example by whingeing about it in a blog) maybe we can save them before it is too late.