Last night, due to train cancellation I found myself at a loose end in Rochdale. To pass the time and keep warm I decided to walk to the next railway station along the line, Castleton a distance of 3.5 km away. The trip was practically a guide to the routine mistreatment of pedestrians which goes on everywhere in the UK.

The pavement was completely covered in ice the whole way, next to roads which had been gritted days ago. At one point the ice turned back to snow and I realised that I was walking on a grass verge rather than a pavement, which had ended abruptly a few meters prior for no obvious reason. When I got the the first of the junctions I was to traverse I was confronted with this:

View Larger Map
Four pedestrian crossings required to cross one side of a the junction. Naturally pedestrians have the absolute lowest priority in this layout, so I was forced to jump the red. I hope the motorists didn't lose respect for me and other pedestrians in the process. Having tackled that junction, when I came up to the next, I noticed that someone had seen fit to block my way with an unnecessary fence.

View Larger Map
Luckily, being able bodied and reasonably fit I was able to traverse this pointless obstacle. The pavement became slightly less icy after this point: 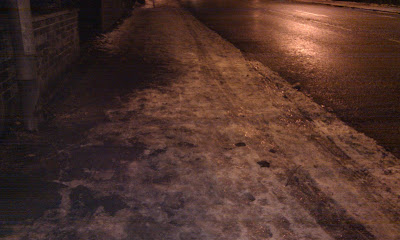 Eventually I passed a bus stop as a budget JPT bus was letting a passenger off. I saw the fairly low price of a ticket advertised on the window of the bus and decided to end my misery there. Thanks Rochdale MBC for making choosing to walk in Rochdale even less appealing.
Posted by Dr C. at 14:30

Email ThisBlogThis!Share to TwitterShare to FacebookShare to Pinterest
Labels: Crap Cycling and Walking