Ten bike parts & accessories due for a comeback

Progress is generally accepted as a good thing, but sometimes new trends, materials and components come along which don’t have all the advantages of the things they replace. This is especially true in the world of bicycles. I present here my top ten bicycle technologies and accessories which I feel are due for a comeback (some of which are already enjoying a bit of a resurgence). 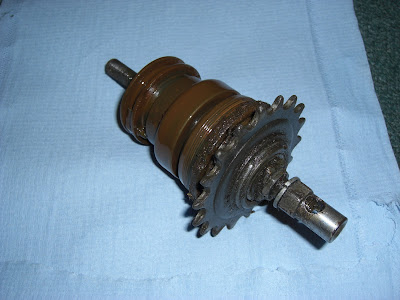 The innards of a Sturmey Archer AW hub I am currently working on. Even in this state, the hub is still working.
My first experience of hub gears was in Belgium, on a hire bike used for a bicycle tour of Brussels. The bike was equipped with a Nexus 8-speed hub which offered a similar range to my 24-speed derailleur-geared bike of the time. I instantly appreciated being able to shift gear when stationary, the possibilities for enclosing the chain and the increased durability from sealing away the gears inside the hub.
Two of the Three bikes I now own have hub gears.

Image courtesy of Ecovelo
The same bike in Brussels had the most basic model Shimano Roller brakes. These were weaker than the disc brakes I was used to at the time, but once I had gotten used to the reversed brake levers (left-hand front, as is common in countries with right-hand traffic) I came to like the idea of trading a little stopping power over discs for a great deal more durability. Being sealed away in the hub means that their performance is independent of weather conditions, unlike rim brakes. For a bike you depend on to get around, drum brakes are a great option.
The Raleigh DL-1 has similar front and rear Sturmey Archer drum brakes.

Image courtesy of jargonautica's Picasa album
Briefcase clips were a common feature of rat-trap pannier racks here in the UK in the days of mass cycling. Naturally in The Netherlands and Denmark they are still relatively commonplace. A small loop protrudes from the side of the rack into which a briefcase handle is placed. The spring-loaded rat trap is then lowered, and a small protruding rod from it holds the briefcase in place.
Whilst briefcases are not as common as they were, I regularly use the clip on the DL-1 for plastic carrier bags when I have been a bit over-zealous with the grocery shopping, or for my U-lock when I have no space in my regular pannier. 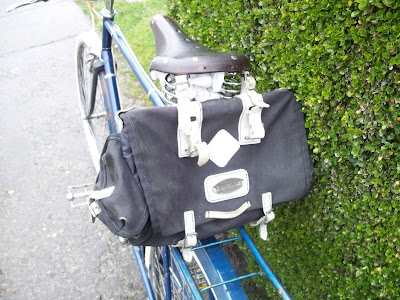 A Carradice saddlebag on a Raleigh Wayfarer. Image courtesy of Urban Adventure League
I am hoping to join the saddlebag club soon. Saddlebags were once commonplace, but declined in popularity with the decline in transportation cycling in the UK. Like panniers, they place the load on the bike rather than the rider, reducing the amount of effort required for carrying and preventing the risk of a sweaty back which comes with backpacks. They also offer advantages over panniers; the load is more central and less likely to affect balance and they do not require a rear rack, only a saddle with bag loops such as a Brooks.

Wool is great. I'm not a big fan of having special clothing just for cycling, I'd rather wear something which is practical both on and off the bike. In the colder months wool is ideal for this, it is warm, it breathes and it absorbs a decent amount of moisture without feeling wet and it doesn't readily hold odours.

A completely enclosed chain on a Pashley bicycle. Image courtesy of Let's Go Ride A Bike
When dérailleur gears are no-longer used, the possibility of completely enclosing the chain is opened up. A chain guard has the advantage of protecting the rider from the chain, meaning no more trouser clips or rolling up your trouser leg. A chain case offers this advantage whilst also protecting the chain from road filth and rain, leading to a longer life and reduced maintenance.

Most of the bikes on sale in the UK come with either riser or straight bars, as seen on mountain bikes, or drops (resembling ram's horns), as seen on racing bikes. These bars offer a moderately aggressive (straight) or aggressive (drops) riding posture suited to sport cycling. For everyday transportation, they are not the best choice for everyone. North road handlebars (and similar variants) offer an upright riding position. The advantages of this include; comfort for the rider, increased head height (ideal when negotiating traffic) and rider weight is shifted back (reducing the possibility of going over the handlebar under heavy braking).

A lugged joint between a top-tube and head-tube on a steel frame. Image courtesy of Rivendell
Aluminium has become a very popular frame material in recent years, due to the pursuit of ever lighter bicycles. It is light and stiff, making it an appropriate material for frames. The different properties of aluminium mean that it is desirable to use oversized tubing, which makes the frame particularly light and stiff. Despite this, many feel that steel produces a better quality of ride, the reduced stiffness of the narrower tubing used in forks seems to allow more of the vibration from the road to be absorbed and dissipated before it reaches the rider. This perception is of course completely subjective, but is something worth considering. Other advantages of steel include the possibility of lugged construction, which I find to be aesthetically pleasing, and the relative ease with which a steel frame can be repaired in comparison to an aluminium one.

I read somewhere that most of the bikes which have ever been manufactured are of the same basic design as the English Roadster or the Dutch Bike. In the UK however, this design in geometry have fallen out of favour. Whilst the roadster is enjoying a bit of a resurgence due to the popularity various models of Pashley Cycles, the relaxed roadster geometry is mainly only seen on bikes marketed as "traditional" or "heritage" bikes. The geometry of these bikes makes them ideal for everyday transport for the average person's needs. In addition to the models make by Pashley, I'd like to see some more designs based on this geometry available in UK bike shops.

A topic I have written about extensively, dynamo lights are a great option for an everyday transport bike, where an "always available" lighting solution is very desirable. Most people are put off by memories of cheap bottle dynamos driving terrible filament lamps, but modern hub and bottle dynamos are much better. Combine these with modern LED lighting technologies and you have the perfect dependable lighting solution for an everyday transport bike. No batteries, no fuss.
What bicycle components and accessories which have fallen out of favour would you like to see coming back?
Posted by Dr C. at 12:14