Last year, after I got my Twenty a friend of mine, AC also decided she would like to invest in a Twenty too. She named it Beatrix and now blogs about her experiences with the bike. The bike was re-painted at the time, but the result did not stand the test of time well, I believe due to the lack of a final clear coat. She asked me to do the re-spray.

Instead of all-over blue, AC asked me to paint the mudguards and chain-guard white, and re-paint the frame and fork in the same blue. When I applied the first coat of blue, the old paint bubbled off on the main tube to reveal the old Raleigh decal. I decided to take the initiative and leave this old decal exposed in a Time Team kind of way, a trench in the paintwork showing the history of the bike. To preserve the decal, I masked over it and cut around the decal.

To get the paint to adhere to the frame well, I gave the whole thing a sanding with fine grit sand paper and applied several thin coats of blue, with light sanding in-between coats. The white on the mudguards was not covering the blue appropriately, and I decided to get a can of cream paint to go over the white. After painting the frame, I used a combination of masking tape and bin bags to cover all but a small section of the main tube near the decal, which was then painted cream to frame the original decal.

The frame, fork, mudguards and chain-guard were all sanded lightly and coated with several layers of clear enamel spray, and the bike was re-assembled. 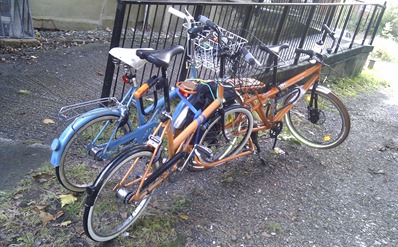 Beatrix as she was, on the back of the Yuba with my old Twenty 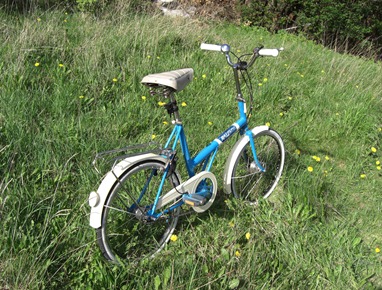 Beatrix after the re-spray 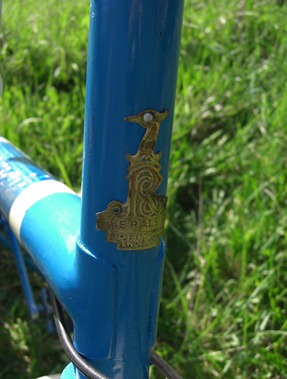 The Raleigh head-badge has been stripped and returned to prominence 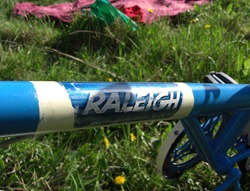 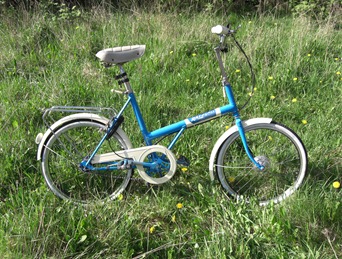 The blue, white and clear spray used were from Halfords’ enamel range, the cream paint used was made by Plasti-kote.