This is my last ride report from my trip to Practical Cycles, where I was able to try out several cargo bikes I had never ridden before. I decided to save the best for last, the Bakfiets.nl Bakfiets. This particular Bakfiets’ frame and box is also used as the basis for the Workcycles Bakfiets as seen on iamnotacyclist. 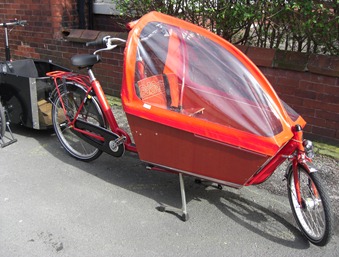 The model I tested had the rain-cover add-on attached. Designed to keep your cargo (be that animal, vegetable or mineral) dry, the rain cover does not impair the rider’s view or negatively impact the ride. 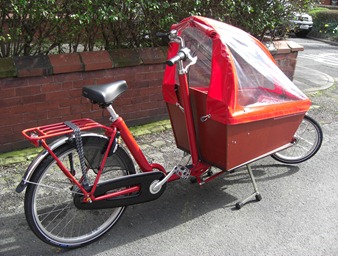 The seat-tube angle is very low, even by the standards of Dutch geometry. This allows the rider to fully put a foot or two down whilst stationary, which helps to balance larger loads, or loads which move themselves around. The slack seat-tube angle means that despite being able to put your feet down when stopped, it is possible to get a good amount of leg extension whilst cycling, allowing the rider to put a good amount of power down. It is nice to see this level of though devoted to frame geometry after seeing so many bikes where geometry seems to be an after-thought (I’m looking at you “hybrids.”) 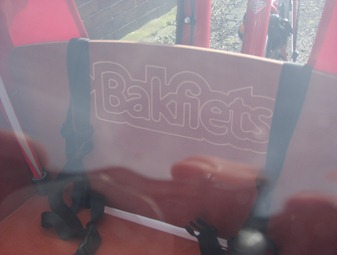 Looking through the plastic rain-cover which forms a tent over the cargo box. 5 year old me would have loved riding in there, and I would probably still be partial to doing so. Seat platforms with seatbelts are available for seating up to four children, in up to two rows of two. Alternatively, the box can be emptied of these to fit in an adult, dogs or non-live cargo. 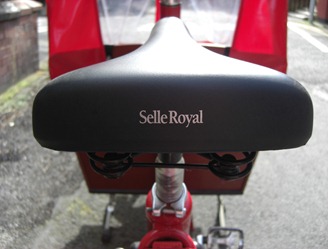 The Selle Royal saddle is likely aimed at novice or non-cyclists. I found it acceptable for my short test ride, but I expect experienced cyclists would replace this with a Brooks B67 or similar.

The choice of componentry is ideal for this kind of bike, it is low maintenance, durable and weather-proof: 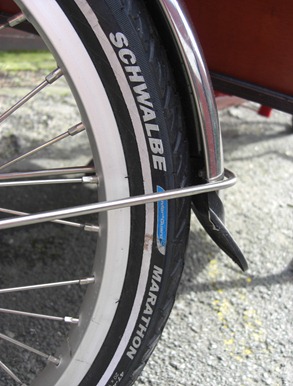 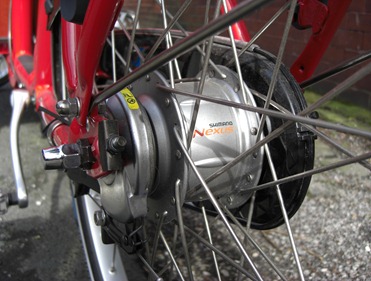 Shimano Nexus 8-speed internal hub gears, and a Shimano roller brake. An upgrade to the much more powerful IM70s is available 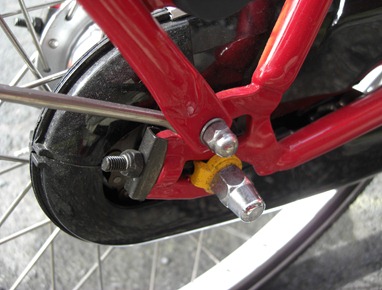 A full chain-case is provided to protect the rider from the chain, and the chain from road filth 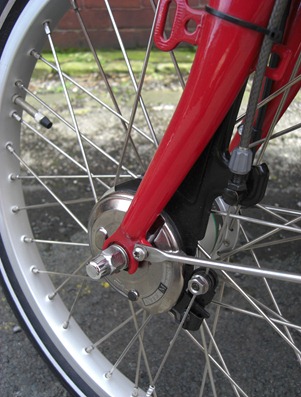 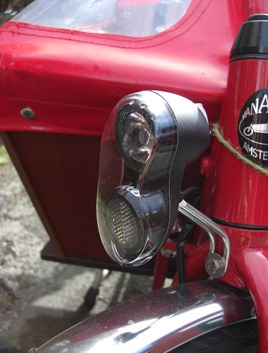 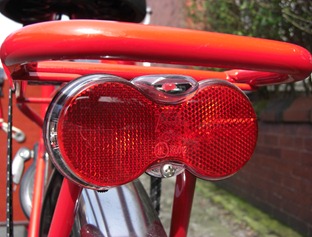 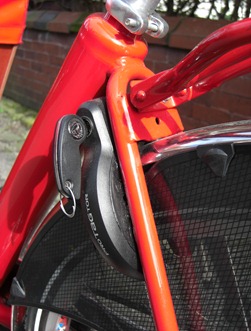 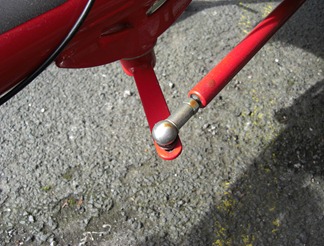 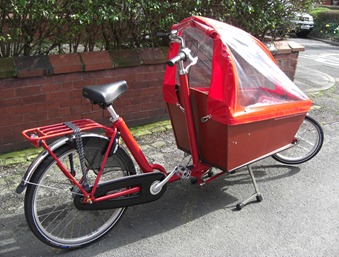 It took me less than a minute to get used to the altered handling caused by the  front wheel offset, mainly because the offset of fairly minimal when compared to a normal bike such as a roadster. The handlebar is attached to a very steep tube, and the front wheel is only 20 inches in diameter to accommodate the box. This results in a stet up where the front wheel is only slightly more further forward than that of a 28 inch wheeled roadster with a slack headtube angle, such as the DL-1 or a Pashley Roadster/Princess.

The bike feels a lot lighter to ride than I expected, and easier to manoeuvre through doorways and such when not being ridden. The gearing offered a suitable range of low gears for accelerating & hill climbing with loads, with a good enough range to allow you to reach a good speed. The extended wheelbase produces a very stable and enjoyable ride, which despite the notable differences in design, feels instantly familiar to me as a Yuba Mundo owner. The ability to put your feet down whilst still having adequate leg extension makes the bike ideal for carrying children, where the desire to keep the bike upright when stationary needs to be balanced with being able to effectively propel the extra mass along.

The bakfiets is an extremely versatile bike, capable of hauling loads of cargo like the longtail Yuba Mundo or Surly Big Dummy, but with the re-assurance of having that cargo visible to you whilst riding. This is especially important for carrying passengers as it means parents can keep a watchful eye on their children, or adult passengers can more easily socialise with their chauffeur than on a longtail bike. The bakfiets also opens up possibilities for animal carrying which is less feasible on other cargo bikes, such as a larger family dog. When I have the space and money, I will definitely be getting one of these.

The Chorlton Green Festival is on Saturday, and the bakfiets along with the Surly Big Dummy, Yuba Mundo, BSP Seine, Circe Helios, Nihola Cigar Trike will be there at the Practical Cycles stall for test rides, along with the Zigo Child Stroller/Trike and the Civia Loring Town Bike. See you there.