The petition to block the proposed Cyclists (Protective Headgear) Bill in Northern Ireland has finally attracted some attention from the larger press outlets. With wider exposure comes the usual heated discussions over helmets in the comment threads. Many of you know my own stance on helmets, but I would not want to force anyone who wishes to cycle with a helmet to do so without one. 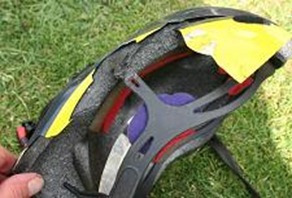 A helmet slpit along the vents, a common mode of failure. Image courtesy of cyclehelmets.org

One type of comment which comes up frequently on these comment threads follows the general form of “A helmet saved my/a friend's life.” This is not particularly surprising, during my own school days I remember being shown emotive video footage of an interview with a teenager who had survived being hit by a motorist whilst he was on his bike. He proudly showed the camera his helmet, split in two and with an unshakable conviction he stated that it had saved his life. In the years since this experience, the arse-about-face approach to road safety has continued to gain traction and find its way into online materials aimed at school-age children.

When listening to stories claiming a helmet saved someone’s life, it is important to remember that anecdotes aren’t the same as evidence. Consider the following:

With no control experiment, where all variables other than whether or not the rider was wearing a helmet left unchanged, it is impossible to state with any confidence whether or not the helmet had made a difference, or to appropriately quantify any difference it may have made.

The effects of risk compensation also need to be considered. For those who have been told and accepted the idea that a helmet will save their life, there will be an increase in their perceived safety which will have an effect on their behaviour. This also goes for the operators of motor vehicles, who will perceive a helmet-wearing cyclist as being less at risk from their vehicle. It is possible that the change in behaviour both on the part of the cyclist and the motorist caused by the effects of risk compensation were instrumental in leading to the collision. This effect has been studied with ABS in the Munich taxi experiment, and can also be seen in the increase in the severity and number of pedestrian and cyclist casualties following the introduction of compulsory seat-belt legislation, drivers felt safer with seat-belts and adjusted their behaviour to compensate for the reduced risk to them by driving faster and braking later. This resulted in decreased safety for those not travelling inside a car.

There are safety concerns attached to wearing a helmet, including increased risk of rotational brain injury which can be further exacerbated by the interaction between the air vents on a helmet and irregularities in the road surface leading to an increased risk of neck injuries. These effects are often dismissed due to the acceptance even amongst helmet advocates that there are limits to the protection a helmet can provide; if a helmet-wearing cyclist is injured in a collision, the injuries they sustain are uncritically regarded as being “less substantial than if they had been without a helmet,” when in fact they may have been exacerbated or even caused by the wearing of a helmet.

It is human nature to find causal links between events which may in fact be unrelated. This is how we end up with things like lucky pants and ritualistic behaviour of athletes and sports-fans; people struggle to separate correlation from causality. For example, I have been involved in several minor incidents due to motorists over the years and survived each one of them. On every occasion I was wearing boxer shorts, but it would be foolish to state that my survival was definitely caused by the fact that I was wearing boxer shorts. At the very least I’d want to see the results from a control experiment where I was wearing budgie-smugglers in the same situations.