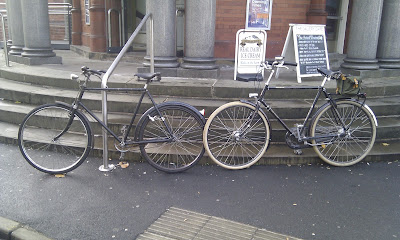 Taken at the Manchester Tweed Ride on Saturday, a Hercules Roadster. Like many of the British bicycle manufacturers, Hercules was eventually rolled into Raleigh through eventual owners of the majority of the bicycle manufacturing business, TI industries. The Hercules Roadster may have been made around the time of this amalgamation; William, its owner, informed me that the rear hub was dated as 1949. The similarity of the frame to that of the DL-1 is quite striking. It just goes to show, if it ain't broke, don't fix it.
Posted by Dr C. at 08:30