Living with a Broken System

The road network in the UK is a broken system which has slowly been almost totally misappropriated by motorists to serve their interests.  Whilst I am comfortable riding on the roads, I can see why they are unattractive to new and potential cyclists.  This is why despite my own comfort with road-cycling I would support the wide scale construction of segregated cycle facilities on the Dutch model.  I believe this will be more effective in getting people out of their cars than other initiatives.  Subjective safety is important in encouraging cycling, but is overlooked often.  After all, most humans aren’t rational creatures, how else would we end up with a society where it is seen as normal to drive a mile to get two bags of food from a supermarket.

On the other side, I understand why existing cyclists can be opposed to such facilities.  The existing cycle infrastructure in the UK is largely worthless, the logical fear being that extension of cycling infrastructure would be along the lines of what we already have, and that a large investment in this kind of infrastructure would lead to cyclists being legally compelled to use it.  I would prefer not to have any cycling infrastructure than the dangerous and idiotically designed facilities we currently have being expanded on a large scale.  It is also worth noting that if we moved away from having one car for almost every adult, the reduction in traffic would make the roads safer and more inviting for other types of traffic.

However, none of these things is happening right now and so all that remains for us to do is to try and make do with the broken system we already have.  The best way I have found to do this is with vehicular cycling.

If you are new to cycling, think about where you position yourself on the road.  Do you ride as close to the kerb as is practicable?  Do you find yourself wary of entering the traffic flow?  Do you worry a lot about being hit from behind whilst cycling along the road?  Do you find that you are often overtaken with very little clearance?  I think most new cyclists would answer yes to most of these questions, and the more experienced of you may remember a time when those concerns weighed heavily on your mind.  I know I do.  There are a few simple tips and techniques which can make riding on the road feel a lot safer (and be a lot safer).

1) You are traffic.  Traffic does not equal cars, you have as much right to use the road as anyone.  You pay for the roads just as much as anyone else.  You are entitled to use the whole of the lane if you feel it is necessary.

2) Don’t ride in the gutter.  If you do, motorists will treat you like you belong in the gutter.  Most gutter-cycling is a response to the fear of being hit from behind.  In practice this is extremely rare.  When cycling in the gutter motorists will try to squeeze through a gap about as wide as you plus the car plus 5 cm.  These small but apparently passable gaps come up fairly frequently, and being hit whilst being unsafely overtaken is a fairly common form of motorist negligence.  Try to ride at least a metre out from the kerb.  You can start small and slowly increase the distance when your confidence grows.  This will stop unsafe overtaking because there will be fewer opportunities for motorists to overtake when it is not safe to do so.  There is an interesting psychological effect which comes with this technique; motorists are much more likely to overtake using the proper technique prescribed by rule 163 of the highway code: 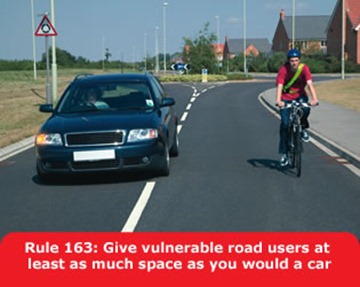 To further decrease your risk of being unsafely overtaken,  be sure to not wear a helmet. 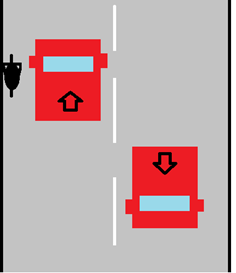 This is a common occurrence when gutter-riding, the near-death overtake. 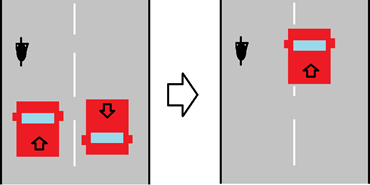 By taking control of your part of the lane, you can prevent this kind of behaviour.

It is also useful to stay at least a meter or so out from parked cars, due to the risk of “dooring.”  It is a sad state of affairs that a great deal of the existing cycle lanes in the UK are placed in the door-zone of parking bays.

3) Look behind you, a lot.  It is important that if you are going to be a part of the traffic, you need to know when is coming from behind.  I tend to check behind whenever I can hear a car approach, except in slow moving “rush” hour traffic where it is not feasible and the cars are not moving fast anyway.  Even when you can’t hear anything it is worth checking behind once a minute or less.  The benefits of doing this are threefold; You know what is coming from behind you, making you more confident to ride further from the left, secondly the person in the car sees you look at them, you cease to be a bicycle in their mind and become a person and thirdly motorists are told during their “training” that they should look out for cyclists who are looking behind them as they may be wishing to pull out shortly.  This helps in making sure you are overtaken safely.

4) Traffic islands and other narrowing road sections.  When the road ahead of you does not allow adequate space for anyone to overtake you, ride in the centre of the lane to stop them trying.  Don’t feel bad about adding 10 seconds onto someone else’s journey in the interests of safety.  Remember you have as much right to the road as anyone else.

5) Right Turns (or left in most of the rest of the world).  Right turns can be problematic when you are being overtaken by a heavy traffic stream.  The key is signal that you want to make a right turn.  Sadly most motorists will ignore their obligation to let you merge, the key is to make it look like you are going to turn anyway, whilst being aware that most motorists will still happily overtake you.  A bit of a scare will make one of the overtaking cars slow down enough to make a merge and then right turn feasible.  This takes practice.

7) Roundabouts.  These can be a problem for cyclists, as can the infrastructure designed to provide an alternative for cyclists due to they sheer impracticality of it.  Many busy roundabouts are being replaced with traffic lights, I would like to hope that cyclists’ needs played a part in this decision to move away from them.  They probably didn’t though.  Most people, regardless of conveyance are bad at using roundabouts.  The skills of not gutter riding and looking behind frequently will help on roundabouts, as will being able to accelerate and ride quite fast.  The alternative is to dismount and cross it as a pedestrian.

These are just some of the tips and techniques I use to make the best out of a bad situation.  If you have any more to share please feel free to comment.