Drum brakes are underrated.  I think they suffer at the hands of the relentless promotion of cycling a sport in the UK.  In the rest of Europe drum (also called hub brakes) and roller brakes (roller brakes being Shimano’s slightly different take on drum brakes) are widely used because they are effective in all weather conditions, due to being sealed away from the elements in the hub of the wheel and even with very little maintenance they last forever.  They may cost more than other brake systems can, but they are a long term investment and will save you money in the long run on disc brake pad and rotors or rim brake shoes (and fresh rims).  Racing bikes don’t come with them because they are heavier than rim brakes, and mountain bikes don’t come with them because they are less powerful than disc brakes.  Those two types of bikes pretty much cover bikes as far as bike shops are willing to promote and as far as most people here are concerned.  If you are riding a bike primarily for transport and utility, drum brakes are a good option to consider especially because they do not require any special mounting points on your bike like other brake types.  Simply build (or have built) a wheel with a drum brake hub, screw on the clip for the reaction arm (can be made to fit any for or frame) and away you go.  I decided to upgrade the front wheel of the Twenty with a drum brake hub I got from eBay quite cheap because the fork on the twenty only had a mounting point for calliper brakes, and the steel rims on the wheel meant that the brakes were awful. 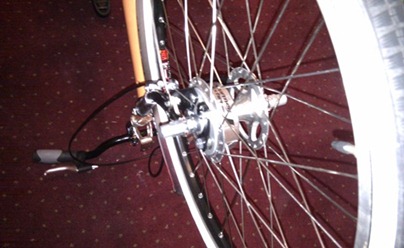 I used a Sturmey Archer X-FD hub laced to a Sun Ringle rim (they make 451 mm rims, bought from here).  I used a 3-cross pattern due to the need to transmit torque from the hub to the rim, making a two cross pattern less suitable and a radial pattern a very bad idea.  The lack of dish and the fact that it is a 36 spoked 20 inch wheel means this wheel is probably stronger than the Yuba Mundo rear wheel.  I think it will last well. 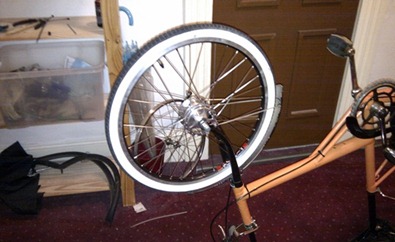 The fork of the Twenty was initially too narrowly spaced for a standard 100 mm OLD hub, and the fork ends were keyhole shaped to aid wheel retention, preventing the use of a standard diameter axle.  The “crotch” of the dropout (to use the technical term) is able to accept a modern 9 mm axle, so all i had to do was file out the narrow keyhole shaped section to become straight and stretch out the the fork a bit by holding one fork blade with my foot whilst pulling in the other with my hands. 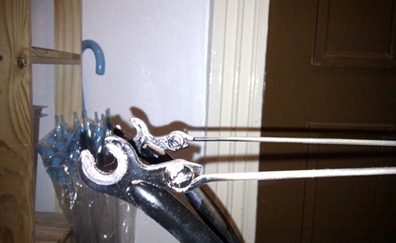 Sadly I didn’t take an after filing picture because my hands were too filthy, but if you have a normal bike, take the front wheel off and look at the fork ends, that is what it looked like afterwards. 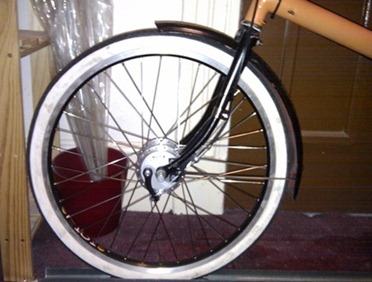 I took the bike out for a test ride last night.  Drum brakes have a bedding in period like disc brakes, but even right away they were powerful enough to lock up the front wheel.  I suppose the smaller wheel size makes drum (or any hub-located brake) more effective; to use an oversimplification, if it takes half a revolution of the drum for the brake to stop the bike, on a smaller diameter wheel, this distance will be less, and you will stop more rapidly.

I may be the first person to put a drum brake on a Raleigh Twenty, I haven’t seen any pictures of anyone else doing it, (and SRAM actively discourage using their drum brake hubs in small wheels) but I hope that this information is useful for anyone thinking of upgrading their Twenty with new brakes.