I have spent the weekend working on the Twenty, stripping the paint, getting rid of rust, repainting, servicing the bearings and replacing the cables and chain.  It is now almost rideable, I just need to service the calliper brakes and re-attach them, although I doubt I will keep them. 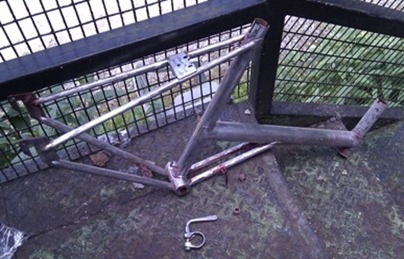 Stripping the paint was very labour-intensive.  I used a combination of a wire brush drill bit, a sanding bit from a Dremel and manual sanding to remove the paint and the odd patch of rust.  Once the frame was naked I went to work giving everything a coat of anti-rust spray primer. 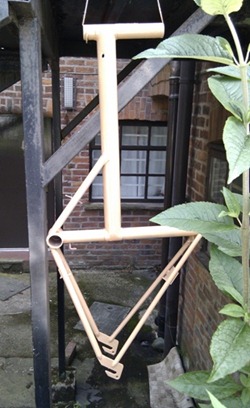 I suspended the frame by the headtube from a fire-escape to maximise the area I could spray  (I did the same for all the other bits such as the mudguard, fork etc) 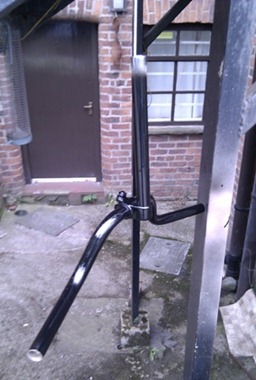 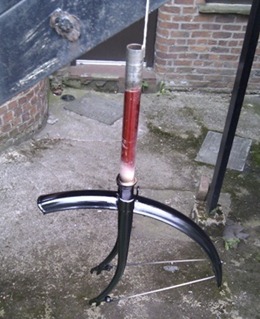 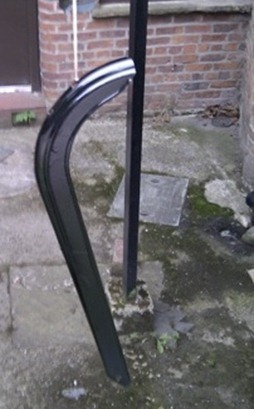 After several layers of primer, paint and polyurethane clear-coat I re-assembled the bike.  The first thing I did was the fork and headset.  When I took the headset apart I was surprised to see that there were no bearings in the lower cup/crown race.  A quick look at Sheldon Brown’s Raleigh Twenty page fixed that, I needed 25 5/32nds of an inch ball bearings.  The cranks and bottom bracket seemed ok, so I kept them and just cleaned out the cups and replaced the bearings and re-assembled it all (after cleaning off the rust).  The back wheel seemed fine after a bit of poking around and a clean, with the Sturmey Archer AW hub living up to its reputation as one of the best made mechanical items in human history.  The front hub turned out well too, I replaced the 3/16th of an inch ball bearings and cleaned out the hub and all seems well with it.  By Sunday afternoon I had my new Raleigh Twenty almost ready to ride: 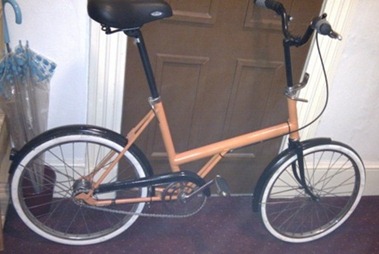 Those who have read this blog before may notice the similarity in the paintwork to the Yuba Mundo: 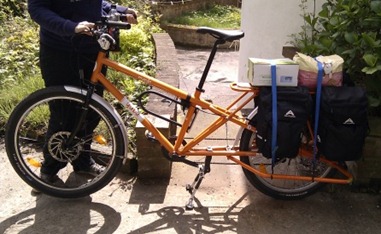 This is partly for comedic effect when they are used together, and partly because my current intended use for the Twenty will be when I go to pick people up from the city centre (or anywhere else within about 5 km or so) by taking the Twenty with me, with the Yuba acting like a mothership.