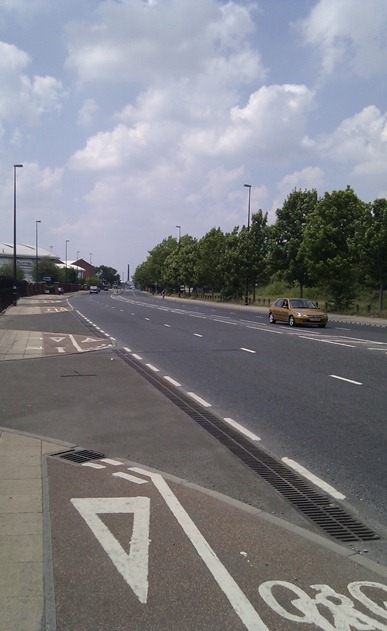 The cycle path is located off-road, which many prefer.  The path is actually just coloured pavement, meaning it goes up and down every time there is a side road, which I could live with, but they completely screwed up the priorities at the side roads, with every minor side road requiring you to give way.  These cycle lanes are supposed to be a part of the road which they are next to, meaning that the priorities should be the same (meaning just move the white lines so they are inline with the bike lane; job done).  It just makes sense.  Anyone experienced will choose to use the road, and anyone inexperienced will be repeatedly inconvenienced by this terrible design. 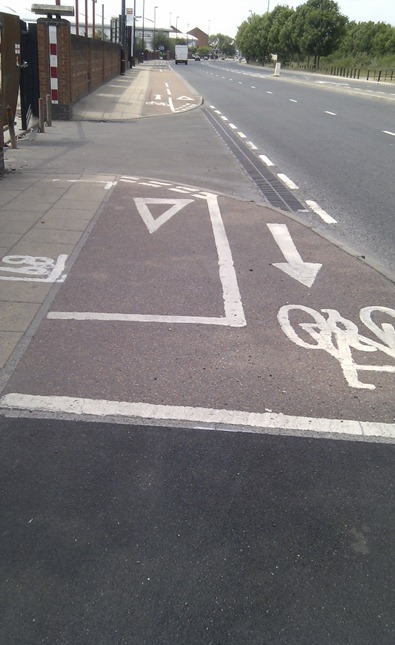 The lane puts cyclists travelling in both directions on the same side of the road, but occasionally switches side for no apparent reason.  Sometimes there is a lane on each side, requiring the cyclist to stop and use a pedestrian crossing when they see things like this, and other times they just end without and indication that you were expected to cross the road at all.  I wish I could have taken a picture of the roundabouts, but my battery died. 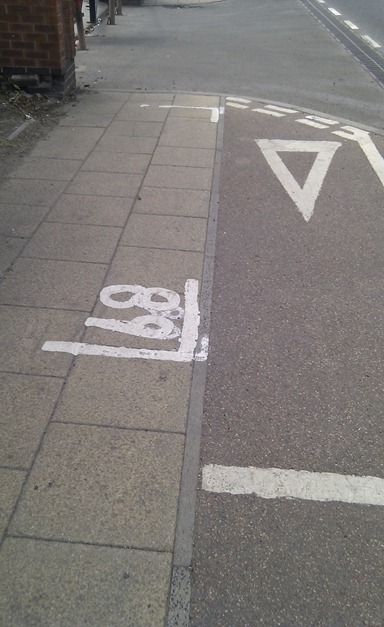 The sections near (and I use the term loosely) Old Trafford football stadium have these markings for stalls selling crap on match days, note the fact that they consume all of the pavement, making pedestrians use the cycle lane and forcing cyclists off them.  Closer to The Trafford Centre, the pavements occasionally cease to exist at all, being replaced with cycle lanes only (despite adequate space for both).

I only saw a handful of cyclists the whole time I was walking, and I’m not surprised that the ones I saw were on the road.  Trafford had a chance to build some useful cycle infrastructure here, and they completely screwed it up.

The walk was quite interesting though, because Trafford Park is used almost exclusively for warehouses and distribution centres, it was almost completely free of people on a Saturday (except those few driving through).  It was quite eerie, there was even a mini village with a chip shop, Post Office, barbershop and pub which was completely devoid of people.  The closed shops and pubs indicated they were only open around the standard 9-5 Monday-Friday working hours.  The pub was only open until 8:30 pm on weeknights, closed on the weekend.  I would like to explore the area again, but with a bike so I can cover more ground.  I don’t think I’ll be using those bike lanes though.