Last night I took the new dynamo light out for a spin.  It was around 8pm, so not dark but getting there, and ideal time to test out the sensing ability of the lamp.  I first put the light onto the “1” (always on) position and found that it was not coming on consistently.  I then decided to put it into the “S” (automatic) position and found that the light was still not always on, but seemed to be on more often.  At first I was concerned that I would have to go very fast to get the light to work well, seeing the beam come on and then go away was a bit worrying when I was teetering around the 20 km.h-1 mark.  I later managed to get a look at my reflection in the parked cars and realised that the light was always on, but when it was light enough it just illuminated the small “be-seen” LED portion of the lamp and when I went it was coming on full beam it was because of the dip in light level. 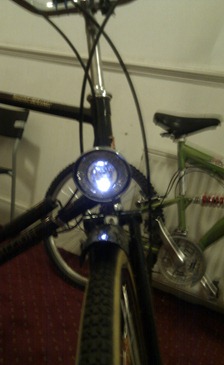 The stand-light provides enough light to be seen by other road users when stationary.

I am assuming that on my (maybe all of them) lamp the “1” and “S” positions are reversed, but that even when set to always on the lamp uses the sensor to determine what level of light is needed.  I quite like this idea because it will increase the length of time between halogen bulb replacements.  Like most aspects of dynamo lighting, it would have been nice if this feature had been explained somewhere in either the instruction leaflet or on the B&M website.